King’s Day in the Netherlands

King’s Day, also known as Koningsdag, is celebrated on April 27th, the Dutch King Willem-Alexander’s birthday. The tradition was originally called Princess’ Day and celebrated on August 31st, the birthdate of the then Princess, Wilhelmina. When Wilhelmina became Queen, the name was changed to Queen’s Day, but the date remained the same. Both Wilhelmina’s daughter, Juliana, and granddaughter Beatrix continued the Queen’s Day tradition, albeit on a different day, April 30th.

Did You Know? Beatrix’s birthday is actually in January. But knowing an outdoor party is not all that fun in the dead of winter, she graciously decided to keep the April 30th date.

To sum that up, King’s Day in the Netherlands is now celebrated on April 27th, not April 30th as some tourists with out-of-date guidebooks have found out.

And if you weren’t already familiar with the Dutch love of the colour orange, then by the end of King’s Day you will be. The Dutch Royal Family is known as the House of Oranje. Oranje means orange in English, hence the increase of the colour on this special day. 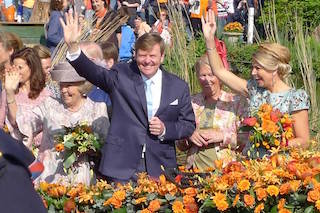 King’s Day in the Netherlands: From Music to Flea Markets

It was Beatrix who introduced the practise of gathering up her family and visiting areas around the Netherlands on the day—a spectacle that can be watched both in person and on TV. But it is the other King’s Day festivities that are the real attraction.

Starting the evening before, you’ll find musical performances in The Hague and other big cities. On the day itself, live music, lots of decorated boats on the canals, flea markets, and street parties—all with plenty of orange—can be found.

Expatica has a handy King’s Day guide with additional information on activities in each of the main Dutch cities and more ways to enjoy the day itself.

Fact: King’s Day is the only time when you are allowed to sell on the street without a permit.

Manage Cookie Consent
To continue to the site, your consent to the following is required by applicable privacy law, including the EU’s General Data Protection Regulation (GDPR). We and our partners use technology such as cookies on the site to personalize content, provide social media features, track your preferences, analyze traffic, and support and improve the site. Click "Accept All" to consent to the use of this technology.
Manage options Manage third parties Manage vendors Read more about these purposes
View preferences
{title} {title} {title}