There may be 9 million bicycles in Beijing – sings Katie. But did the artist know that Amsterdam alone has 881 thousand? Perhaps then she would’ve made a song about the Dutch capital, which has more bicycles than people and 767 km of bicycle paths. That guarantees unlimited possibilities for cycling in this beautiful city of romantic canals and architectural wonders.

A Huge Network of Bike Paths

Biking in the Netherlands is by far the most popular form of transport. In fact, not only the cities are designed for cyclists. Most roads connecting Dutch cities are lined with paths, making it possible to cycle across the entire country. This not only keeps the Dutch fit and emissions at a low, but also guarantees an unique experience. Whether you are cycling in the city during your short stay or across the farmlands, you will see so much more on two wheels. The expats living in Amsterdam will agree.

We can almost say that the Dutch are born on bicycles. As soon as they are able to sit up, their parents place them either in a bicycle seat or a bakfiets (or, in other words, a cargo bike… for children!) and rush them from one end of the city to the other. At the age of 5 they are ready to hit the paths themselves. It’s very safe to do so ever since the country adapted the driving regulations in the favour of cyclists in the 70’s. From that time on – there’s no denying – cyclists have ruled the streets.

Where to Get Your Fiets

If you are travelling for your Corporate Housing short stay, you’ll want to have the full Dutch experience in the city. First thing you’ll need is an Oma or Opa fiets. You can rent one at one of the many rental spots scattered over the city. Download the MyCHF app in the App Store or the Google Play store to find some recommendations!

Not a Confident Cyclist? No Problem!

Not feeling fully comfortable yet with cycling? No problem! Our partner Dutch Uncle offers a special package teaching you how to not only ride your bike like a Dutchie, but also about the traffic rules. Your guide will show you the shortcuts to top locations in the city, as well as to your workplace. Biking in the Netherlands will become super easy.

Once you start pedalling, you’ll want to explore…

The Most Scenic CYCLING Routes in Amsterdam and Beyond

We’ve prepared for you a list of stunning routes in and around of Amsterdam:

The (old) “Tram No. 5” – most of the highlights of the city can be admiring while cycling along this route. We suggest beginning your journey at Centraal and cycling right, through Prins Hendrikkade, down stunning Prinsengracht. There you can admire the staple views of Amsterdam – canals, grachtenhuizen (canal houses) and flowers.  You will reach the Anne Frank House and pass the famous 9 Streets, eventually ending up at Museumplein. This route is a must-see if you are visiting for the first time! 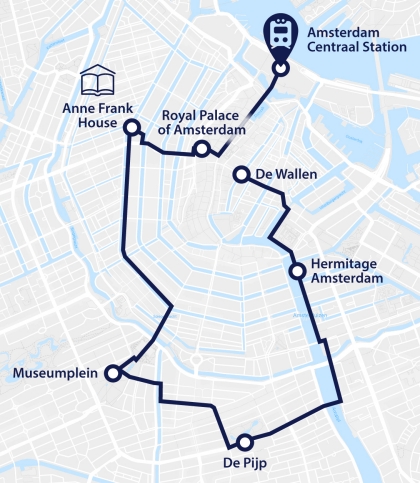 The “Ronde Hoep” – a stunning route starting in Amsterdam and going along the Amstel river, lined with 19th century houses and views perfect for taking photos. Some attractions along this route include Riekermolen Windmill, riding through Midderpolder Nature and Recreation Park and arriving at the cute village of Oudekerk Aan de Amstel. 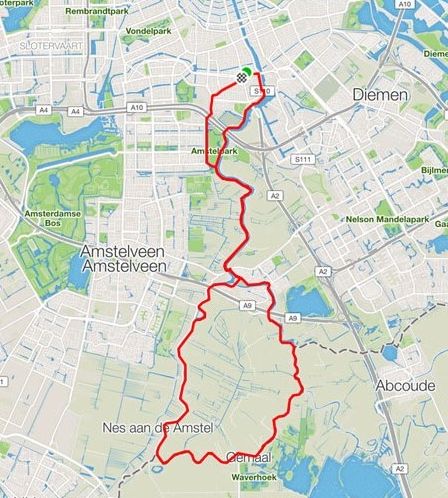 Tulip routes  – if you are visiting the Netherlands in spring, you can’t miss the tulips! For the ambitious cyclists, there is an option to cycle 2 hours from Amsterdam to Keukenhof and begin the sightseeing there. For those who prefer to take it easy, there is an option to catch the Keukenhof Express Bus 852 from RAI and rent a bicycle on the spot. Cycle through the colourful fields of tulips and visit the cute villages along the way.

Amsterdamse Bos – cycle to Van Boshuizenstraat from there you explore the many paths surrounded by greenery and take a rest by the lake. Once you return to where you started off from, you might decide to grab a coffee or a bite at the Grande Café de Bosbaan.

Ready to hop on your bike?

Biking in the Netherlands is a top choice by expats and locals. Amsterdam has so many hidden gems that are only accessible by foot or bike. Similarly, outside the capital. You can cycle to any village, town or city through the impressive network of bicycle paths. It’s fun, cheap and you can see so much more than by car! What are you waiting for? Adventure awaits!

Manage Cookie Consent
To continue to the site, your consent to the following is required by applicable privacy law, including the EU’s General Data Protection Regulation (GDPR). We and our partners use technology such as cookies on the site to personalize content, provide social media features, track your preferences, analyze traffic, and support and improve the site. Click "Accept All" to consent to the use of this technology.
Manage options Manage third parties Manage vendors Read more about these purposes
View preferences
{title} {title} {title}